Article and photo by Louis Pin

Joey Robinson sat in the library at Forest Park Public School in St. Thomas, matching sounds to letters in a game of Simon Says. In this case “Simon” was Stacey Solis, a co-op student from Fanshawe. She’s one of the first people in the London region to actively teach the Strong Start literacy program, ten weeks of one-on-one sessions with local elementary school children. It’s a trial run for Forest Park, one of 22 schools selected to pilot the Strong Start program.

“We’re starting really big,” said Ruth Kilgour, a learning support teacher at Forest Park .”It’s new to us and we’re still getting our feet wet, but we really want to dive in.”

In November 2017 the Thames Valley District School Board became the seventh board to partner with Strong Smart, an education-based non-profit based in Waterloo. The literacy program — the one coming to London and the surrounding region — was created to fill gaps in reading and writing for children from kindergarten to grade three. The goal is to help students before they fall behind. The school board agreed to test the program in 15 schools at first. More than 40 applied.

“When we were given the opportunity to be (part of) the pilot program we jumped on it,” said Chris Masterson, principal of Arthur Ford Public School in London. “This is direct training that we’re getting, for the Strong Start program.”

Volunteers have been screened and trained for the last few weeks leading up to the school board’s spring break, from March 12 to March 16. They’re given materials and games to play with children to help them improve their letters, sounds, and words. The pilot will fully kick off March 19.

The final rounds of training took place at Arthur Ford Public School on Thursday. Every volunteer had a story; some were parents or grandparents, while others were already volunteering at a school and looking to do more. For Maria Martens, a student at Fanshawe College, the program took a more personal tone.

“I didn’t know English when I started school,” Martens said. “So this program would have been for me, very beneficial. If I can give this to somebody else then that would be great.”

The first schools to try Strong Start have already been selected. They include eight in London, two in St. Thomas, two in Strathroy, and ten others in smaller municipal centres.

“We wanted to make sure (the pilot) was available to all areas,” said Mary Roes, with the Thames Valley District School Board. “So we have schools in all of our Thames Valley counties. From Tillsonburg down to Port Burwell; it’s not just the London schools.”

The Thames Valley District School Board is still looking for volunteers, but turnout has been more than enough since Strong Start was announced.

“We’ve had a really great response so far,” said Kilgour, with Forest Park.

If the pilot program is successful the school board will consider instating it across more of their public elementary schools as soon as fall 2018. 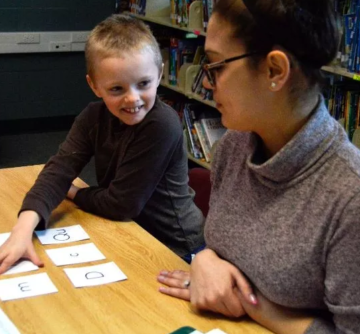