Before we moved to Cambridge, we lived in a cute, little town of 500 called Calvin Township which is located between North Bay and Mattawa. Our property backed onto bush so we didn’t have neighbours or services around. We really lived a northern life. We hunted and we fished. We cut wood to heat our home. It was a quiet lifestyle, which we enjoyed, but our boys didn’t really have any friends.

We have two sons, Ryan (11) and Rhys (4), who spent a lot of their time playing together or with us. Services were too far away, so we would just play in the backyard, go snowshoeing or go snowmobiling. We didn’t want to give up the northern life, but knew that our children needed some socialization and some programs. For Rhys specifically, the northern life is all he knew.

Rhys is an adorable, funny and strong-willed little boy.  He’s always been advanced in his gross motor skills, but when it came time to separate from Mommy, he just couldn’t do it. My husband and I struggled when it came to us going out for an evening, or getting coffee with friends. He would have utter meltdowns.  When we moved to Cambridge, we had looked into a few home daycares and programs that we thought he could participate in, but they weren’t prepared to deal with anxiety like Rhys’s.

When we were looking for a program, I was a desperate Mommy. I didn’t even have the option of going back to work, because it would have been too hard for Rhys. I was worried how he was even going to go to Junior Kindergarten in September. My girlfriend told me about the Get Ready for School™ program and we went and registered right away.

I don’t know if at the time I was looking for anything else from the program other than some socialization for Rhys. I wanted him to know you can have fun with friends, you can have fun with teachers, and you can have fun in programs. I didn’t know how awesome Get Ready for School was really going to be! It was full of people who were actually willing to work with us when it came to Rhys’s anxiety.

In the beginning, it was a struggle to even get him out the door, without mentioning “school,” as we called the program. All the hairs on the back of his neck would stand up and he would refuse. All of the instructors in the program were onboard, and when they saw him come into the room, they helped as much as they could. We brainstormed a lot as well, thinking of ideas on how to get him comfortable in the room.

For the first three months of the program, I sat on what we called the “blue couch,” which is inside the room. A lot of the time, Rhys would just sit with me and watch the program from a distance. The instructors would encourage him to participate; they would try to integrate him into the activities. Slowly Rhys took little steps, so little you almost didn’t recognize they were happening until all of a sudden I was sitting on the “blue couch” by myself. Sometimes I would have to participate in circle time, or in one of the activities, but eventually I didn’t have to anymore. Rhys felt confident and safe with the instructors in the program.

I graduated from sitting on the “blue couch,” to the “green couch,” which is outside of the room. This was very exciting! Every once in a while he would come and check that I was still there, but even that became less frequent.

I knew the program was going to help him learn letter sounds, practice a routine, and sing songs. I just didn’t know all the other benefits it was going to have for Rhys. Before the program, there were things he just didn’t want to do. When Mommy would try to sing with him, he would just look at me and say “no”. But in the program, he wanted to participate and now when we’re at home, he sings songs on his own, which is amazing!

There were so many moments when I saw the program was making a difference for Rhys, but one early on that stood out was during circle time. I was sitting on the “blue couch” watching one day while they were singing Old MacDonald and when the time came to choose which animal was next, Rhys put up his hand and said horse. It was such a proud moment because he was actually participating without me! That moment brought a little tear.

If I think back to the beginning of the program to where we are now, it’s a huge difference. Rhys has more confidence and he feels more secure. He knows Mommy is going to come back and he knows he can do things without Mommy. I have a feeling that come September, it will be a new environment, and we may need to start getting Rhys comfortable all over again. But this time, we know what works. We know what we’re in for, so it may not take three months to get him used to school, but only one month. I wouldn’t have known what to do to help him if it wasn’t for the Get Ready for School program.

Rhys’s anxieties were my anxieties so when he’s feeling comfortable and confident, my anxieties are also alleviated. It was a proud moment when I could leave the “blue couch” and sit on the “green couch” or even leave the building. I had some time for me and when Rhys was in the program, I could connect with other parents. We’ve actually met up with some of the families outside of the program, to allow the children to socialize. Even the families we didn’t meet up with always offered words of encouragement. It was a wonderful support system for me.

There was one mom who had a child that suffered from anxiety and she kept saying it gets better, it gets better. I kept thinking really, is it really going to get better. But then all of a sudden it did start to get better with Rhys, and I thought this is awesome! The Get Ready for School program helped Rhys and it helped me. I am so grateful to have participated. Rhys’s future looks so bright. 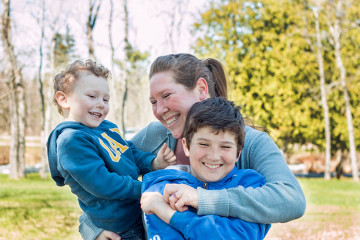