Grant Cooper’s talents are many. A retired high school geography teacher who has traveled the world, he now builds furniture, pens and stained-glass windows for interest. However, it is his big heart and wood-working craftsmanship for which Strong Start® Charitable Organization is most appreciative. His skilled hands and giving nature produced every wooden make-a-word spinner in the Letters, Sounds and WordsTM program.

Grant’s hobby of wood working, began as a boy. His father was a hobby wood worker too so he was “always around it,” explains Grant. In 2004, Lynda Silvester, the original designer of the program, knocked on his door asking if he’d be willing to create 60 make-a-word spinners. He jumped at the chance to help. “It was right up my alley, and I loved helping out the kids,” says Grant, a proud father and grandfather.

“Grant’s attention to detail was something Lynda really valued,” says Ken Sylvester, Lynda’s widower who was also instrumental in some of the initial legwork to get the program up and running. “He took it on as a mission, not just another job in his woodshed.”

As the program continues to grow across the province, so does the requirement for more word spinners. In February, 2014, Program Operations Manager, Mieke Schroeder, met with Grant explaining the need. Again, Grant met the challenge – this time for 1000 make-a-word spinners. He dedicated over 200 hours to the project and completed them all by August.

This was no small task, as each spinner started as a board of white pine which was cut into blocks. Edges were routered, holes drilled in each, then each one was planed, and sanded. Next a dowel was inserted into a row of four blocks and assembled with a cap and dab of glue. Finally a different letter was painstakingly burned into four sides of each block with a wood-burning tool.

Children participating in the Letters, Sounds and WordsTM program may not know the amount of time and effort that went into the make-a-word spinners helping them learn to read, but their smiles are thanks enough for Grant. 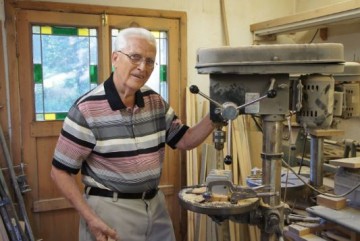