Nahlah was just learning to speak English as her second language and now in grade one she was expected to read it also. Volunteer Coach, Delphine, worked with her in the Sounds strand of the Strong Start®: Letters, Sounds and Words program. Other volunteers worked with Nahlah in the other strands of the program.

Nahlah, at the beginning of grade one, knew almost all the names of the letters but could give a sound for only 60% of these letters. She could not identify any of the 28 words on the test used before the program starts. This meant that Nahlah, now in grade one, had not yet met the achievement expectation for the end of the kindergarten year.

Progress in the first few sessions was slow. Then suddenly during the fourth session, to Delphine’s surprise, Nahlah suddenly said she needed a piece of paper. She feverishly started printing a few words that she was learning in the Words section of the program. It was her “Aha” moment when she made the connections. She simply beamed with delight! It made Delphine beam with delight also.

By the end of the ten-week program, Nahlah could identify 100% of the letters and sounds tested. Even more impressive was that she could now read 22 of the 28 words!

Volunteer Coach, Kate, has also worked with children who are learning to speak English and comments that:

“Of course like every other child, they like the extra attention, but in addition I find the children learning English are a lot more vocal in a one-to-one setting than with a group. I think it is less intimidating for them. It is easier to take a risk with one person than when you are in a group. Some of them, especially the girls, are very shy.

There are some pictures used in the games in the program that a child new to the country wouldn’t have the faintest idea what they were. We have to discuss these pictures before the child can play the game of matching a sound to a picture. Talking about the pictures becomes a learning experience in itself for a child who is just learning English. The Strong Start® program really complements all the other help children are getting in the school’s English as a Second Language (ESL) program.”

Delphine and Kate agree that it is awesome to be a part of this as a Strong Start® Volunteer Coach! 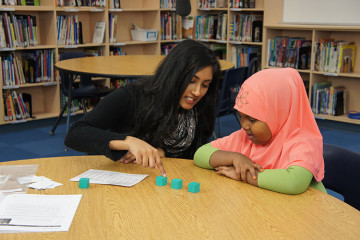