My son’s name is Oliver. He’s left-handed, red haired, and very quiet. He has a heart of gold. He wants to protect everyone. When we play games, he even wants someone else to win. He’s very shy, and we love him very much.

Before Oliver was in the Letters, Sounds and Words™ program, he did not like to read. We would read to him every night, but he had no interest in words. If you tried to talk to him about what a letter was, he would just grunt. It wasn’t something he felt about confident about. When we received his report card in Junior Kindergarten it said he recognized only 4 letters and 2 numbers. We were worried.

The first day of Senior Kindergarten, Oliver didn’t want to go. He punched and he fought. He did NOT want to go. It did get better, but he would always ask if today was a school day, and was sad when it was.

When we got the waiver for Oliver to participate in the Letters, Sounds and Words program, I looked it up online. I saw all of the assessment results and thought, there is no way it’s going to make that much of a difference. I was hopeful though. I felt he just needed some confidence, self-esteem and one-on-one attention. When we tried to work with him at home, he didn’t want to do it. With another person though, I thought he would at least try.

About 8 weeks after he started the program, there was this breakthrough moment. We were driving and he saw a street sign that said Bell Street. “That’s a B,” he shouted! In my head, I was thinking you can’t read letters. I was amazed!

Things snowballed from that point, and continued to get better and better. He reads words now and loves books. I often have to tell him to put a book down in the morning so he can actually eat his breakfast. He still has some hesitation when reading long words, but we tell him to take it easy, and just try. Now that Oliver is in the program for a second time, he isn’t struggling at all. He loves reading. He has books with two or three words on a page and wants to take them with him everywhere.

I started to notice how well he was doing, when we were trying to put a toy together. The instructions had both pictures and words. Instead of trying to follow the pictures, he started to ask me what the words were, and read them. It was like he realized, at that moment, reading was going to help him.

Oliver’s participation in the program has benefited our family as a whole. He has a younger brother, Archer, who is learning 10x faster than Oliver did. He wants to be just like his big brother, so he copies what Oliver is doing. I’ll be practicing the “Letters I Know,” and “Sounds I Know,” cards with Oliver, and Archer will want a turn. Oliver is always reading books, and now I see Archer is trying to do the same. I know he isn’t reading, just looking at the pictures, but it’s a wonderful habit for him to get into.

One of the biggest changes I noticed in Oliver is the confidence he gained in the program. It made reading a much more positive experience for him and our family. He doesn’t always ask me if it’s a school day and even talks to me about what’s going on. He’s so proud of everything he’s accomplished and so are we. 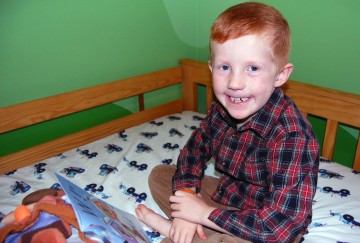