Every parent worries when their young child starts school, anxious to have everything go well. There are even more fears if English is not the child’s first language.

My name is Elzbieta and this is my story.

I have three children: two sons, Rysiu and Lucjan, and a daughter, Cecylia. We are Polish and speak very little English at home, so I worried about the children’s knowledge of English. Looking ahead to Junior Kindergarten, I worried about leaving them on their own at school for the first time, yet I wanted them to gain the confidence of being with other children without having me nearby.

When I saw posters for Get Ready for School™ at my community centre I signed up Rysiu immediately because he was the right age. A year later, I put Cecylia in the program.

Rysiu is an extroverted little boy who learned so much from the program. The letters are taught phonetically, which is similar to how you say the letters in Polish, so he grasped the English letters quickly. It helped him a lot as he entered Junior Kindergarten, and it also helped me let him go off to school for the first time.

Cecylia is shyer than her brother. She held on to my leg and stayed near me when we went out so I worried about how she would fare in Get Ready for School. Well, she loved it! The length of the classes (two hours, three times a week) was perfect for her. The combination of learning and play was compact, but intense for their ages of three or four. Even though Cecylia’s English was poor, she wasn’t inhibited. The program creates small groups of four or five children which kept her alert and engaged. She was asked questions and encouraged to talk. She had trouble expressing herself, but that didn’t bother her. The instructors supported her and she learned a lot. It really helped get her out of her shell.

I noticed changes even in the second week of the program. Cecylia was excited to go to “school” and she loved using her backpack.

When I picked her up, she was excited about sharing everything she’d learned in class. She would ask what a word meant and I would explain it to her. I noticed it always related to the topic they were talking about in class. It really hit me that she was actually learning when we read a Halloween book with a picture of a skeleton. In class they had talked about the body and bones, and she turned to me, pointed to the correct spot on the skeleton picture and said that was where the heart goes. It amazed me that she was making the connection between a Halloween book and what they’d learned about the body. She was just soaking up the lessons.

The program also taught me. The parent information sessions and newsletters showed me how to get involved in my children’s education. I don’t have a degree in teaching, so learning techniques such as starting with a simple concept and building on it is something I now use every day. Helping your child learn isn’t just about helping with homework. It’s about critical thinking and opening their minds to new ideas. Parents know their children best, and Get Ready for School showed me how to support their learning at home.

I am so grateful for this program and the help it’s been to me and my children. I can’t wait to put my younger son in the program when he is old enough. 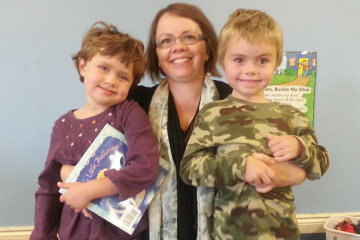