My story starts with Senior Kindergarten, where I could see Sean losing interest in school. At home, he avoided talking about his class and was very reluctant to read with me. It was like he didn’t understand the concept of reading. No amount of coaching or encouragement by me or his dad made a difference: he was convinced he couldn’t read.

Sean’s older brother Nick, for whom reading came easily, saw Sean’s struggle, and read for him to save him from embarrassment and frustration. I, too, was frustrated, running out of ideas on how to motivate and support Sean, yet increasingly concerned with his anxiety over school and his withdrawn behaviour.

When Sean started Grade 1, it got worse. He knew he was not prepared, and was terrified that once his teacher found out he couldn’t read, he would have to leave his friends and return to Senior Kindergarten.

Sean’s Grade 1 teacher noticed Sean’s agitation when it was his turn to read. She also saw his shyness and reluctance to draw attention to himself. That fall, she selected him for Strong Start’s Letters, Sounds and Words™ program, in which he was paired with a community volunteer, Mrs. Shiry. Sean was enrolled in two strands of the program, Sounds and Words. For 10 weeks, he was to meet with Mrs. Shiry each week to play games and do activities. At the start of each 30-minute session, they would review his rings of cards, one set called “Sounds I Know,” the other “Words I Know.”

When he started Letters, Sounds and Words, Sean knew 26 of 52 letter sounds and three of the 28 words by sight. His beginning reading level was 0. At first, there seemed to be no change, but come Week 5 it was as if a terrible burden had been lifted. He smiled more and seemed more confident. One evening, Sean and I were snuggled together in his room, as I watched him play a Mario and Luigi game on his Nintendo DS. The game has written prompts, which either his brother or I read to him. On this particular night, Sean, without hesitation, read aloud the instruction printed on his DS screen. Then he looked over at me and his big blue eyes opened wide. I gasped as my equally wide eyes met his.

“Did you hear that?” he asked. “YES,” I replied, tears filling my eyes. In that instant, I knew Sean had achieved a breakthrough in reading. It was as if a light bulb had gone on. I will NEVER forget the joy on his face; tears still burn my eyes every time I think back to that moment. Sean continued reading that night, enjoying the payoff his new skill brought.

As Sean worked toward Week 10, his skills, and more importantly his confidence and independence, grew. Now he loves going to school and never wants to miss a day. I invited my sons out for breakfast to mark the end of my Registered Massage Therapist certification, but as much as Sean loves breakfasts out, he didn’t want to be late for school. We found a different way to celebrate.

By the end of the Letters, Sounds and Words program, Sean knew all 52 letter sounds, 27 of the 28 words by sight, and his reading level had jumped to 6. He is so proud of his accomplishments. His certificate and rings of cards are like trophies; months later, they still sit on our dining room table, shining reminders of Sean’s accomplishment. Sean has not looked back. What he gained from this experience goes way beyond learning to read. He is so much more independent and happy. Instead of trying to protect him from disappointment, Nick encourages Sean to strive.

Sean dreams bigger now that he can read. He feels anything is possible. His current career goals are to be a double Olympian, competing in both summer and winter sports, and then to be the manager of the waterpark at Canada’s Wonderland. Strong Start made a significant and positive difference in my son’s life. I can’t thank the program or Mrs. Shiry enough for what they did for my son. 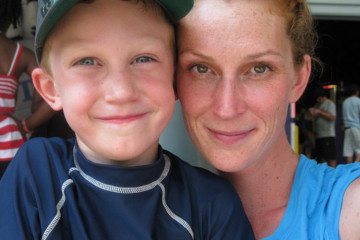