Kelsey was a bubbly little girl. She became a bit more introverted as school went on as it was always a challenge for her. Early on, we noticed there were speech issues and processing issues. She wasn’t high needs by any means, but needed extra support to help in her learning.

In Kindergarten, Kelsey’s teacher noticed that some things just weren’t making sense to her. Specifically, she identified Kelsey’s reading as a concern.  At the end of Kindergarten, her teacher did a graded A, B, C reading level assessment. Going into Grade 1, Kelsey should have been reading at a C level, but she wasn’t even on the charts yet.

I remember my sister, who was a Special Education Co-ordinator for the Avon-Maitland School Board, telling me that if Kelsey can learn to read, she will be okay. It’s the children who don’t have their literacy skills that they worry about because it brings on a range of other issues to address.

When Kelsey went back to school in September, she had a new teacher with a background in Special Education. We met with the teacher who told us about this great new program that would help her get up to speed. This was the Letters, Sounds and Words™ program.

Kelsey had always loved books, but she couldn’t seem to connect the dots to read to herself.   She needed some help and practice to get her going.  I was hoping that by the end of Grade 1, Kelsey would just be closer to where she should be.

Throughout the year, I would get these little reading progress reports from her teacher. When she reached the C reading level, we were so excited. It was a start! I never imagined that by the end of Grade 1 she would be on par with the other children in her class. In the space of a year, she had made huge gains in her reading skills!

As a parent, you worry that your child will disengage from school if they struggle with it. Kelsey never lost her interest in learning, but she always had to work at it. Lucky for us, the reading component was something we were able to figure out and help her with quickly. It became an area we didn’t have to worry about and we focused on supporting her in other ways.

Kelsey always had a lot of tutoring, and worked with special education teachers throughout her school years. Looking back, she never seemed negative about the Strong Start program. It really just helped her thrive and contributed so much to what she was able to do from that point on.

Now when I see her curled up on the couch with all her books reading, I just think that was a little girl who couldn’t read going into Grade 1.

Kelsey was in the Letters, Sounds and Words program when she was 6 years old. She’s 18 now and in her first year at Conestoga College in the Early Childhood Education program.

Kelsey has always wanted to work with children, which I think partly has to do with the challenges she faced early on. Kelsey has found what she’s passionate about. She’s happy, loves school, and loves what she’s doing.

I think Kelsey’s success now has a lot to do with the supports she received early in life. Early identification made a huge difference for her. 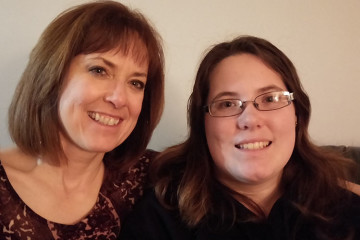