There were plenty of smiles in Brantford during this year’s Tim Hortons Smile Cookie campaign. The simple act of buying a chocolate chunk cookie lovingly decorated with blue eyes and a cheerful pink smile raised $97,234.95 for Brant Food For Thought and Strong Start Charitable Organization as part of a record breaking national campaign. This year’s Smile Cookie campaign that ran from September 16-22, supported more than 550 local charities in Canada and raised a record breaking $10 million nationally.

“We always look forward to participating in the annual Smile Cookie campaign,” says Ron Fox, Tim Hortons restaurant owner. “I want to thank our loyal guests and dedicated team members – this year’s campaign was a huge success because of their support. The money we raise makes a real difference in our community and we’re so happy to be part of it again this year.” 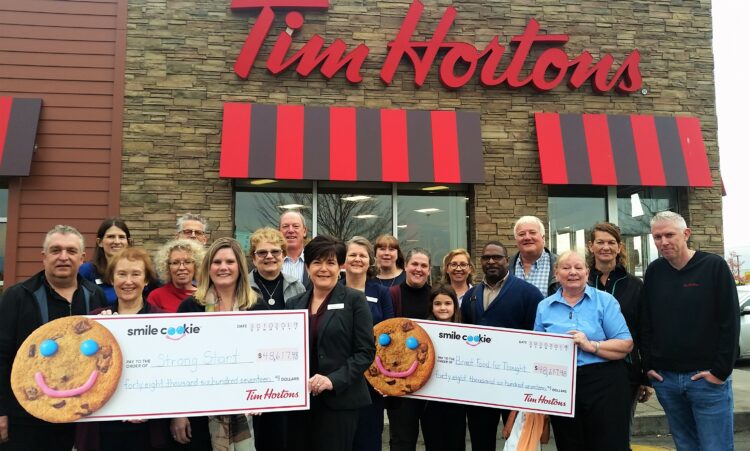 The Brantford community was a buzz during the weeklong campaign! Just think, in seven days, in 19 restaurants, over 97,000 cookies were sold! There were over a hundred volunteers who assisted the hard-working, enthusiastic Tim Hortons team members who led the effort, baking, decorating and promoting the cookies from morning to night during the campaign. Thank you to all the Tim Hortons teams for your efforts and thank you to the volunteers who gave their time to support them. Thank you to the schools, companies, agencies and individuals who purchased cookies in support of the children in Brantford. We are all smiling with sincere gratitude.

“It’s amazing that the small act of buying a cookie can make such a big impact,” says Gisèle Budgell, Program Director of Brant Food For Thought. “Thank you to Tim Hortons for the continued partnership. We are so happy that our local community came out in support Brant Food For Thought and Strong Start Charitable Organization and we can’t wait to make a difference with the dollars raised,” said Ruth Mills, Strong Start Program Co-ordinator.

Visit www.timhortons.com/smilecookie for a complete list and to learn more about the charities that will benefit from the millions of Smile Cookies sold as part of this year’s campaign. 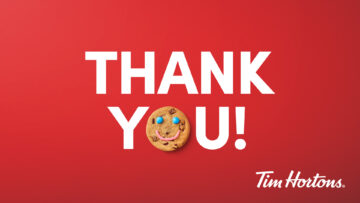