“Mama bear, I want a hug,” a little girl in pink and white sneakers softly reads out loud.

Clutching the yellow Bear Hugs book, she rocks back and forth in an old wooden rocking chair and doesn’t look up until she has read the last page and clapped the book shut.

It was “hard” and “boring,” the Grade 1 student at Cambridge’s Silverheights Public School says as she bounds around the school’s spacious library, running her hands along the spines of several picture books.

“She didn’t want anything to do with it at first,” says Taylor’s mother, Tara Hall. “She would say, ‘No, I don’t have to read that,’ or ‘Why do I have to learn to write my name?’ ”

Then, sometime last year, Hall and her husband, Jason, noticed that Taylor didn’t just abhor the idea of the written word, she was actually having trouble reading.

For all junior-level students, the Hespeler-area school conducts regular “home reading” programs. It starts with simple “letter books” that the students take home to read with their families.

Taylor didn’t want to do the home readings, says Hall. She was struggling to recognize a lot of the letters, so she would get frustrated and just give up.

Hall had speech problems herself as a young child.

“I knew one of my kids would probably be similar, but I had the extra help right through the school, right in my class — it was just part of it . . . The schools don’t exactly do that anymore — there probably just isn’t the funding.”

Luckily though, other kinds of help are still available for students like Taylor, children needing just a little boost with their reading.

Silverheights is one of 123 Waterloo Region elementary schools participating in a program for children who are struggling with literacy early on in their school years. It’s run by a local non-profit organization called Strong Start.

by elementary school principal Lynda Silvester, both since deceased, Strong Start is a community project working to ensure all children have the chance to learn to read. Literacy skills, the organization says, are the strongest indicator of a child’s future success in life. It is also operating programs in 13 Wellington County schools and is spreading across southern Ontario.

Hall says she had heard about Strong Start and its success rate, so when Taylor’s senior kindergarten teacher identified Taylor as a good candidate for the program, Hall didn’t hesitate to give her consent.

“I’m so glad they flagged her for it,” she says.

“You don’t want to see your kids fail, though I know failing is part of the growing and learning process, but at a young age and especially when it comes to something as fundamental as reading, you don’t want them to feel like they can’t do it.”

Initially, Hall says, she felt like she must have done something wrong when she was helping Taylor learn the alphabet at home.

“I wasn’t even sure I was pronouncing things properly — so much of our language is slang,” she says. “And then try explaining to a child why a ‘ph’ doesn’t make a ‘p’ sound, like in ‘pot.’ It was frustrating for both of us.”

Early in the spring of 2010, Taylor started getting help through Strong Start’s chief program, called Letters, Sounds and Words. This 10-week course is designed to provide extra help to kindergarten and Grade 1 students, as identified by their teachers, who are showing signs of literacy struggle.

The students work one-on-one with a volunteer coach in their own school for half an hour at a time, two to three times a week.

“I’d get to leave class,” Taylor says excitedly. “We’d go into the French room, sometimes the library and play games!”

Rhonda Barr, the Strong Start site co-ordinator at Silverheights Public School, worked with Taylor for the entire Letters, Sounds and Words project as her volunteer coach.

“She was a lot of fun, always happy and laughing,” says Barr. “Taylor is one of those perfect target children. All she needed was a little extra attention, a little one-on-one time with someone other than Mom and Dad, and boom — she just took off with her reading.”

Hall agrees the parent-child relationship just wasn’t working the best when it came to pushing Taylor to read.

“Kids don’t want to always learn with their parents. The dynamic is different . . . and she didn’t want to learn from Kaleigh, her older sister, either. We don’t have the same technique as the Strong Start volunteers — there’s such good, intensive training, so they really know what they’re doing — and they make it fun.”

Defeating Barr — who was “awesome,” says Taylor — at the games they played was one the young girl’s favourite parts of Strong Start.

She also enjoyed playing the board game Guess Who, which helped her to recognize her upper and lower case letters.

Barr, who has been working with Strong Start for five years, says all of the students like to beat her at games — Letter Bingo seems to be the most popular — and they are a diverting way of encouraging the children to practise their letters and sounds through various repetitions.

But Strong Start isn’t just about games. The children also read books as much as possible and make a personalized ring of cue cards, one for every letter of the alphabet, for each child to take home and practise.

“Every time you said the letter right, you’d get a gold star stamp on the card,” says Taylor. “And sometimes Barbie stickers.”

After only a week or so in the program, Taylor was coming home saying letters and sounds at every opportunity.

“We’d be at the grocery store and she’d be pointing out every ‘W’ she could find,” laughs Hall. “It was something she could boast about now; she understood it and felt good about it.”

Taylor’s teacher also started to notice a difference and told Hall that Taylor was putting up her hand in class more often.

“She’s never been an overly shy child, but when it came to doing something with reading, before Strong Start, she’d put her head down and shy away a bit.”

Taylor even began to help her five-year-old brother, Iain, who was a delayed talker, to learn his letters. She taught her parents a few things, too.

“I would never have guessed to teach her to make the ‘F’ sound by putting your teeth on your bottom lip,” says Hall. “It was just amazing to see her fly with Strong Start.”

Without Strong Start, Hall says, she doesn’t know what she’d have done.

“It’d have really been a battle,” she says. “It would have come down to Jason and I really pushing her to practice and I know she’d have been overly frustrated.”

Now, a year later, when Taylor’s not getting her green soccer jersey dirty, dressing up her Barbie dolls, wiggling loose her baby teeth, or bike riding, you can bet that she’s reading.

“I like reading by myself,” says Taylor. “I really like Green Eggs and Ham. That’s my favourite book.” 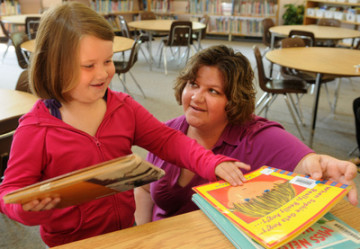