Originally published in the Woolwich Observer

Young readers across the region are once again being supported through the Strong Start reading program, boosted from a recent $4,750 donation from Josslin Insurance.

Strong Start executive director Machelle Denison said Josslin has supported the program since 2006. The organization began in 2001 with just one school in Waterloo Region. This year its programs are in nearly 200 schools across five school boards and three regions. They plan to expand provincially.

The charity organization is driven by its large volunteer base. They each get a manual and have four hours of training before going into the schools. The program is divided into four strands. The letters strand helps children learn the names of the letters. The sounds strand focuses on learning the sounds each letter makes. The word strand teaches 26 words to know by sight because they’re common, but not easily sounded out. And the building words strand is for learning sound blending so they can decode a word and change it by adding a letter, like sand to hand.

The children are assessed at the beginning before they start on what they know and again at the end, and they measure the gain. The assessment results are posted on the Strong Start website.

She said Josslin’s support of the program is crucial because despite many parents reading  every day to their children, sometimes they still struggle with the mechanics of reading.

“We’ve had a lot of feedback from the education committee as well as volunteers about the development and the change in a child’s confidence and their self esteem as they see themselves as successful learners,” Denison said.

She continued, “Strong literacy skills are also a great tool for addressing poverty and think about breaking the cycle of poverty when we can equip children with strong literacy skills early in life. They stay engaged in school; they are successful in learning. It just propels itself.” 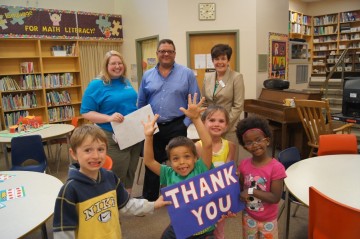